‘Go-global’ is one of the most oft-repeated mantras in the Australian tech sector – and for good reason. To realise the true potential of a startup or scaleup tech company, going global is practically expected by its stakeholders.

When a company wishes to launch its go-global strategy, one of the most topical issues is the concept of a “flip-up”. Whilst this is a commonly-discussed concept, myths and misconceptions abound.

What is a flip-up?

Put simply, a flip-up involves interposing a company (“HoldCo”) between the original company and its shareholders. HoldCo would be incorporated in the foreign jurisdiction of choice, be it the U.S., U.K., Singapore, China, Hong Kong or some other jurisdiction. Usually, but not necessarily, HoldCo is a newly incorporated shell company.

After the flip-up, it can be said that the business’s head company is now located overseas.

Pros of a flip-up

Generally, a flip-up is an integral part of the go-global strategy of a startup/scaleup by potentially providing the following benefits:

Cons of a flip-up

However, a flip-up is not the answer for every company: 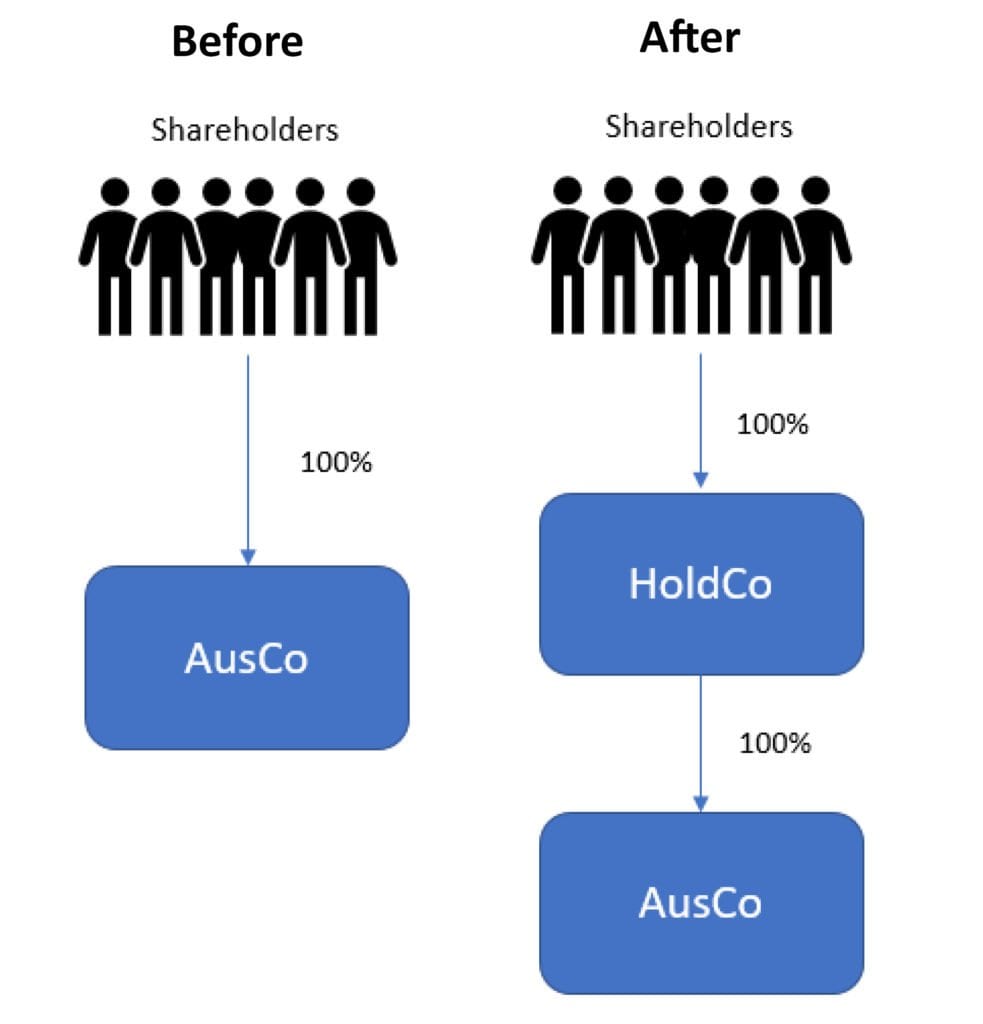 Our advice to startups and scaleups we work with is that “commerciality and timing is key”. Flipping up too early increases the risk of making the wrong call as to whether the chosen overseas destination is in fact the right one, or whether the prospective overseas investor is actually serious about investing. Leaving it till too late could mean missed equity funding and market opportunities

Ultimately, there must be strong commercial reasons for doing business overseas – tax is rarely a critical driver. Due to the complexity, a company should only do a flip-up once it’s sure that it has carefully considered all relevant issues and sought the appropriate advice.

Alternatives to a flip-up

If the stated purpose of a flip-up is to attract overseas investors, a question that should be asked is whether the investor can be persuaded to simply invest in the existing Australian company. Where the main driving force is to access overseas markets, the same benefits may be accessed via establishing an overseas subsidiary company, which involves significantly lower cost and complexity.

Does a flip-up allow a tax-free exit for shareholders?

This is one of the most common misconceptions – people often mistakenly believe that just because they own shares in a company based overseas, they no longer need to pay Australian tax in the event of a successful sale or exit. In reality, a flip-up is unlikely to change the general starting position for most Australian resident taxpayers that a disposal of their investment will likely attract Australian income tax consequences. As always, personalised tax advice should be sought prior to any material transaction.

By becoming a cross-border business you will now need to consider a range of additional financial and tax issues, including but not limited to:

In addition, there are opportunities in the form of R&D incentives in the new foreign jurisdiction you will operate in. For example, in the U.S. there is a R&D tax incentive system with broadly the same principles as the Australian R&D tax incentive.

Getting it done – the process of doing a flip-up

Once the relevant considerations have been undertaken and a startup or scaleup is leaning towards pressing the “Go” button, it is time to seek the appropriate advice.

In a flip-up, the shareholders of the original company are exchanging their shares for shares in HoldCo, which will become the 100% parent of the original company. A flip-up is a project whose commercial, legal and importantly, tax issues must be managed effectively. Generally speaking for an Australian company, the Capital Gains Tax implications for its Australian shareholders will need to be mitigated by accessing the appropriate tax rollover, which, if available, could defer the CGT consequences arising as a result of them disposing of their interest in the original company. Such tax rollovers have specific eligibility requirements, thereby necessitating an experienced tax advisor to drive many of the restructure steps. In addition, an experienced legal team needs to be appointed in both Australia and overseas.

If you have any questions on how to go-global with a flip-up, or if you are wondering if a flip-up is right for your company, contact one of our experienced advisors.